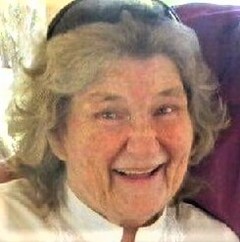 Suzanne was born in a tent during the Great Depression, and often spoke of her memories during that time.  Later her family moved to Pascagoula, Mississippi where Suzanne graduated from Our Lady of Victories Catholic Church and then attended nursing school in Hattiesburg, Mississippi, where she graduated as a nurse.  Suzanne met her husband Phillip G. Frank, Sr., an Air Force Engineer, while performing with her sisters in a singing group. Suzanne was raised with music, and taught all of her children how to sing.

Suzanne moved to Florida with her Husband and raised their family.  Before moving to Inverness, Suzanne and Phil attended St. Cecelia's Catholic Church, Clearwater, Florida where the children attended school.  After the older children moved out and were married, Suzanne and Phil became foster parents for children in Largo, Florida.  After moving to Inverness in 1972, Suzanne's family became members of Our Lady of Fatima Catholic Church.  A charitable woman, she helped with the Saint Vincent DePaul Pantry, sang in the choir and worked with the Respect Life Committee.  Suzanne was a great Pro-life Advocate.
Suzanne worked for the Citrus County School board for many years, but her love of God and her family was always her first priority.

To order memorial trees or send flowers to the family in memory of Suzanne Frank, please visit our flower store.