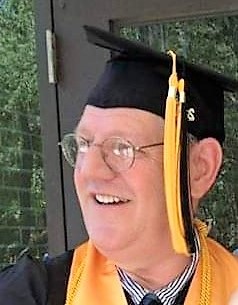 Born March 26, 1955, in East Orange NJ, Steve was raised in Caldwell NJ, and attended James Caldwell High School.  Joining his father in the commercial music field, as a youth Steve sang jingles on various television ads. He moved to Florida in 1977, eventually settling in Spring Hill.  He held positions such as store manager and sales auditor, as well as political surveyor.  He was a Florida Notary, and for a time operated his own t-shirt printing business.  He attended Hillsborough Community College and Pasco-Hernando State College, where he was a member of the Legal Eagles, was named to the President’s Honors List, and inducted into the Phi Theta Kappa Honor Society.  He graduated PHSC in 2014 with an Associate’s Degree in Paralegal Studies.

Well known for his quick wit and social nature, Steve was also a gifted guitarist, and found tremendous satisfaction in mastering special techniques.  He enjoyed participating in jam sessions with friends and his brothers.

Predeceased by parents Bill and Jacqueline Bronson, and his loyal dog Dave, Steve is survived by siblings Bob, Peggy, John, Mary Grace, and Joel, ten nieces and nephews, many cousins, and many lifelong friends, both in Florida and his native New Jersey.

A Memorial Celebration will be held at 1:00 PM on Saturday August 7th, at The Church at Whistling Pines, 16311 Whistling Pines Rd, Umatilla FL 32784.

A private interment will be held at the convenience of the family.  Please make memorial contributions in Steve’s name to an animal shelter of your choice.

To order memorial trees or send flowers to the family in memory of Stephen Bronson, please visit our flower store.

The Church at Whistling Pines