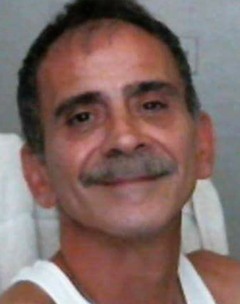 Mario Tremante, 54, of Beverly Hills, FL died on Friday, June 23, 2017 at home peacefully in the loving arms of his companion Glen Schena and best friend Ann Marie Pollard and his Beloved dog, Jade, after a brave battle with cancer. Mario was born on April 27, 1963 in Afragola, Italy, the son of Amedo and Fortunata Tremante. He moved to America in 1971, settling in New York. In 1978 Mario relocated to Inverness, FL and then moved to Beverly Hills, FL in 1994.  He was a very loved and respected chef at the New England Café in Beverly Hills, FL for the past 18 years. He was catholic. Mario enjoyed spending time with his family and friends.  He loved the beach and he also enjoyed watching reality TV and his home improvement shows and had a love for his scratch off tickets.  He was loved by many and sadly missed by all who had the honor of knowing him.  Mario was preceded in death by his parents and brother Joseph Tremante. He is survived by his companion of 23 years, Glen Schena of Beverly Hills, FL. Six brothers, Vincent L. Tremante of Beverly Hills, FL, Luigi Tremante of Merritt Island, FL, Franco Tremante of Merritt Island, FL, Enrico Tremante and his wife Annette of Inverness, FL, Tony Tremante of Merritt Island, FL and Carmine Tremante and his wife Vincenza of Ohio; sister Lina Amelio and her husband Joseph of Vero Beach, FL; several nieces and nephews and great nieces and nephews. Mario’s family will receive friends from 5:00 pm to 7:00 pm on Tuesday, June 27, 2017 at the Heinz Funeral Home in Inverness, FL. The Funeral Mass will be offered at 1:00 pm on Wednesday, June 28, 2017 at Our Lady of Fatima Catholic Church in Inverness, FL. Heinz Funeral Home & Cremation, Inverness, FL. heinzfh.com

To order memorial trees or send flowers to the family in memory of Mario Tremante, please visit our flower store.