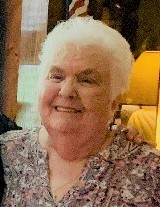 Inverness lost a beloved member of our community on August 20th when longtime resident Joan Marie Wirthman passed away peacefully in her sleep at Citrus Memorial Hospital at the age of 88. Joan was born April 18, 1933 in the Bronx, New York, a daughter of the late Raymond and Josephine Dibble. She was one of four siblings.

Joan was predeceased by her late husband, Joseph Wirthman Sr.; brothers, Raymond and Jack Dibble.  She is survived by her sister, Eadie. She was a wonderfully devoted mother to her four children, Donna and her husband Vinny, Joseph and his wife Kathy, Michael and his wife Eleanor and Thomas and his wife Laura. She was a loving grandmother to her ten grandchildren, Vincent, Danielle, James, Michael, Joshua, Taylor, Christopher, Alexandra, Stephanie, and Nicole. Additionally, her four great grandchildren, Arabella, William, Addison, and Collin.

Joan retired after 20 years as a payroll specialist for the Citrus County School Board, where she was well known and admired for her detailed and analytical approach.

Joan was a baseball/softball enthusiast, watching and keeping score books for her children and grandchildren on the playing fields. She enjoyed traveling on cruises across the Caribbean with family and playing the penny slots at the casino.

She was a devoted Roman Catholic, who spent countless hours working with the Catholic Woman’s Club of Our Lady of Fatima.

Joan led by example. There was never a job too large or too small that she would not tackle. She was a strong, determined and fiercely passionate woman. We will miss her every day.

Special thanks to the wonderful doctors and nurses at Citrus Memorial Hospital who provided invaluable care during this difficult time.

A Visitation will be held at the Heinz Funeral Home in Inverness from 9:30 AM until 10:30 AM on Friday, August 27, 2021.  A Mass of Christian Burial will follow at 11:00 AM at Our Lady of Fatima Catholic Church in Inverness.  She will be privately laid to rest with her husband, Joseph, at Florida National Cemetery in Bushnell, FL.

Her family asks that in lieu of any flowers, donations be made to St. Jude’s Hospital, for the love of these children was Joan’s passion.

To order memorial trees or send flowers to the family in memory of Joan Wirthman, please visit our flower store.