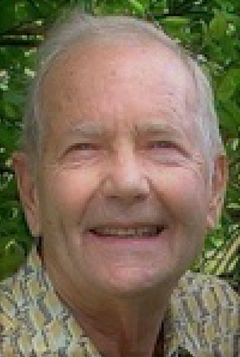 Harold was born in Marion County in 1926, where his family had lived since 1823 when two uncles moved to Martel from Ebenezer Community near Savannah. After two years of crop failures at the farm at Flemington, he joined the Army Infantry at 18 and landed in Europe at the end of the Battle of the Bulge.  Assigned to the 83rd Infantry Division, he fought his way through Germany from Belgium to the Elbe River, where his company was halted to await the arrival of the Russians.

After the war Hal attended the University of Florida on the GI Bill and graduated with a B. A. in English Literature, Speech, and Sociology. After designing and building his first home in Gainesville,  he received a scholarship to study architecture at Columbia University, only to return to the University of Florida, where he received a B. A. in Architecture and attained his NCARB license in 1960.  He served his internship with Rufus Nims as a senior designer for the development of manufactured housing for U S Steel Homes. He was Project Architect for Biscayne College, now St. Thomas University, and Mercy Hospital in its major expansion in 1972 and Architect of Record for subsequent renovation. Major design projects include the Cathedral of St. Ignatius Loyola in Palm Beach Gardens, Our Lady of Lourdes in Boca Raton, St. Kieran's adjacent Mercy Hospital in Coconut Grove, Church of the Incarnation in Miami, and children's Marian Center in Opa Locka. The stained glass window in the Cathedral executed by Rambusch Studios in New York has been published worldwide.

He was an avid sailor and cruised the coast of Turkey. His travels stretched from Hawaii to Rhodes and included Mexico, the Caribbean and most of Europe. In 2011 he embarked on his most ambitious project, to bring music to children.  The creation of which became the Citrus Youth Educational Symphonic Orchestra. His dedication to the vision attracted a core of like-minded people, including Rebecca Limehouse, who succeeded him as president.

He was an inspiration to all his family. He strived to be a man he could respect. His wife Sheila, daughters Kathleen and Joanne, first wife Syble, son Sedrick and daughter Rebecca, and eight grandchildren survive him. He will be missed.

There will be a Celebration of Life for Harold on Wednesday, June 7, 2017 from 2:00 pm to 4:00 pm at the Heinz Funeral Home, Inverness, FL. Bring your instruments!

To order memorial trees or send flowers to the family in memory of Harold Seckinger, please visit our flower store.