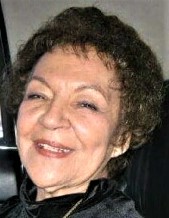 Georgiana H. Fitch, 76, of Inverness, FL died on November 19, 2017 at Melech Hospice House in Temple Terrace, FL.  Georgiana was born on January 23, 1941 in Chicago, IL, daughter of John and Georgiana Hernandez.  She was the owner of Pack-A-Parcel in Madeira Beach, FL.  Georgiana moved to Inverness in 2005 from Largo, FL.

To order memorial trees or send flowers to the family in memory of Georgiana Fitch, please visit our flower store.