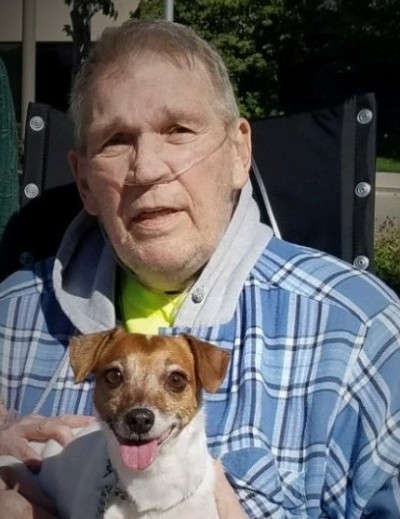 George Allen Radloff Jr was born on February 5, 1941 to George and Redeena (Lowe) Radloff  in Detroit, Mi.  At the age of 11 his family moved to Redford Township, where George worked as a newspaper delivery boy. He enjoyed playing sports at Thurston High School, especially football.  George enlisted in the U.S. Air Force in 1960, and served in Viet Nam and Japan.  After being honorably discharged, he joined the Wayne Co. Sheriff Department. and attended the Police Academy.  Upon graduation from that he joined the Redford Township Police Department where he served proudly for 24 years.
On July 10, 1965  George married Pat Woodcock and they had four children:  Sheryl, (Chris) Lee, George Allen III (deceased), Robert Allen  (deceased), and Daniel Eric.  The family lived on Wakenden in Redford Township for 20 years where they made many life-long friends.  In 1985  they moved to New Hudson, Mi. and also bought a cabin on the Tahquamenon River in Paradise, in Michigan's beautiful upper peninsula.  More life-long friendships developed, and snowmobiling and boating occupied much of their time.
When George retired in 1990, he moved the family (including his mother and mother-in-law) to Inverness, Fl. where he operated Shady Acres Mini-Golf and Mobile Home Park.until 2003.  He regained posession of the park in 2008, & operated it a few more years.  He also worked as a substitute teacher and a realtor.
George was most proud of his family;  son Daniel for serving his country in the Air Force, and both of his children for graduating from college.  He was thrilled to walk Sheryl down the aisle as she married Christopher Lee and subsequently presented him with three grandchildren:  Maddox Riley, Declan Emmett, and Beckett Quinn.
George became a snowbird in 2007, spending summers in Kentwood, Michigan.  He was happiest spending time with family and friends and watching the Detroit Lions and Detroit Red Wings.  Attending his grandson's sporting and musical events was also a highlight of his life.  He and Pat traveled and took cruises before his health began to fail 9 years ago.  George was known for his unique sense of humor and BIG heart.  He was always willing to help anyone in need.  His deep faith in God sustained him throughout his life, especially as his illness progressed.  You were well loved, and will be missed by many.  Rest in peace good and faithful servant
George passed away on January 31, 2020 at home under the care of Vitas Hospice, at the age of 78.

A Memorial Service will be held at 1:00 PM, Thursday, February 6, 2020 at First Church of God, Rock Crusher Rd, Crystal River. The family will receive friends at the church, one hour prior to the service. Heinz Funeral Home & Cremation, Inverness, FL.

To order memorial trees or send flowers to the family in memory of George Radloff Jr., please visit our flower store.