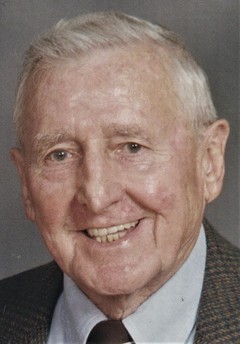 Francis “Bud” Blair , 96, died early Sunday morning at the Grove Health & Rehabilitation Center in Hernando, FL where he had retired with his beloved wife of 70 years, Geraldine Mueller Blair.

Born in Baltimore, MD, Bud was a true member of the “Greatest Generation”.  The son of Frank & Rose Blair, Bud was an all-star soccer player who won scholarships to Calvert Hall High School and Western Maryland College (now McDaniel College) where he excelled in both academics and athletics.   Immediately following graduation, Bud enlisted in the United States Army where he served in the Aleutian Islands during World War II as a commissioned officer.

In 1946 Bud met the love of his life and soulmate Geraldine “Gerry” Mueller.  They married in 1947 and together crafted a wonderful life for themselves and their children, grandchildren, and great-grandchildren for the next 70 years.  Bud was employed by Liberty Mutual Insurance Company for his entire working career.  In the true fashion of the Greatest Generation, Bud started as a salesman in Baltimore, MD, was promoted to managerial positions at the Philadelphia and New York offices and then went on to serve as Administrative Vice President at Liberty Mutual’s home office in Boston, MA before retiring first to Mt. Pleasant, SC and then later to Hernando, FL.  He was active in his church and community throughout the years.  In particular he was active in the Knights of Columbus.  Bud’s athletic ability continued throughout his life.  He was an avid golf and tennis player. At the age of 75, he won the state of South Carolina doubles tennis championship for his age group and then competed at the national level.

A Memorial Mass in celebration of the life of Francis Blair will be held at 11:00 a.m. on Saturday, December 16, 2017 at St. Scholastica Catholic Church in Lecanto.  In lieu of flowers, contributions can be sent to: Calvert Hall College High School, 8102 LaSalle Rd, Baltimore, MD 21286 in memory of Francis John Blair, Class of 1939.  Heinz Funeral Home & Cremation, Inverness, FL.  heinzfh.com

To order memorial trees or send flowers to the family in memory of Francis Blair, please visit our flower store.