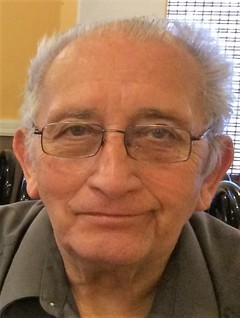 Donald R. Miller, 80 of Inverness, FL died on July 3, 2017 at Seven Rivers Regional Medical Center in Crystal River, FL. Don was born on July 27, 1936 in Northfork, WV, the son of William and Bertha Miller. He was a US Army veteran serving in Korea. Don worked on the Northfork and Western Rail Road from 1959 to 1970. He then worked for First National Food Stores before retiring from Lift Tech. Don moved to Inverness in 1999 from Branchburg, NJ. He was a member of Our Lady of Fatima Catholic Church in Inverness and a 4th Degree member of the Knights of Columbus. Don was preceded in death by his parents, his wife Regina Miller, brother William and sisters Margaret and Jean. Survivors include his four sons, Donald Miller of Columbia, SC, Michael Miller of Monroe, GA, Mark Miller of Huntsville, PA and Joseph Miller of Phillipsburg, NJ, brother James, sisters Martha, Dorothy and Betty, six grandchildren and two great grandchildren.
Don’s family will receive friends from 10:00 am to 11:30 am on Friday, July 7, 2017 at the Heinz Funeral Home in Inverness, FL. A funeral mass will be offered at 12:00 noon the same day at Our Lady of Fatima Catholic Church in Inverness, FL. Heinz Funeral Home, Inverness, Fl. heinzfh.com

To order memorial trees or send flowers to the family in memory of Donald Miller, please visit our flower store.